Authentic Beef Nihari (Beef Shank Stew) recipe, a safe-guarded staple of my family. This blog post will walk you through the key ingredients and steps that will help you achieve this very balance. Buckle in and take note as we journey through this flavorful recipe!

Authentic Beef Nihari (Beef Shank Stew)is a South Asian beef stew, and is an unquestionable Pakistani staple revered all over the subcontinent. The rich, brothy dish is a conglomeration of flavorful spices, tender meat, carefully placed cilantro, and a medley of other garnishes. It's typically eaten with naan, and my personal favorite for the choice of meat is beef, though it can also be made with goat, lamb, and, less commonly, with chicken.

The word Nihari originated from the arabic word Nahaar, which means morning. The dish was eaten by Mughals, and in the early and mid-20th century it was only available in the morning. It's a notoriously heavy dish, so people would eat the dish in the morning so that they could digest it the rest of the day. As we entered the 21st century, Nihari slowly edged its way into becoming an evening time meal. It goes without saying that he was enamored of this dish, but this is simply a testament to the widespread consumption and appreciation for the dish.

These ingredients are cornerstones of this generations-passed Nihari recipe, and, even if you choose to follow a different Nihari recipe (though after tasting this you won't need to!), I encourage you to make sure the recipe includes all of these irreplaceable ingredients. Don't forget to check my 5-Minute Homemade Nihari Masala.

Sonth (ginger powder)- Even though ginger powder doesn't go in a lot of dishes, it's a must-have for Nihari!

WHAT IS NIHARI MADE OF?

WHICH BEEF CUT IS USED FOR NIHARI?

My family has, for generations, been using beef shank; it's very tender and allows for the quintessential Raysha -- strands of meat must be found for a truly authentic Nihari.

TIPS ON MAKING THE PERFECT NIHARI

HOW TO MAKE NIHARI AT HOME?

WHAT TO PAIR NIHARI UP WITH?

Nihari is an ultimate dish on its own. However, Chicken Biryani, Mutton Korma (Qorma), Karahi Gosht go perfectly with Nihari. Don't forget dessert Kheer and Zarda. 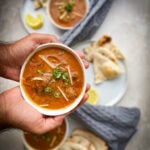 Back to the Nihari Gravy