Pakistani Mutton Korma (Qorma) is one of Pakistan's most famous delicacies. Cooking this formidable dish well can be a challenge, but not to worry! With my recipe, an hour of your time, and some simple ingredients, you will be feasting on an immaculately prepared Pakistani Mutton Korma in no time.

Korma (Qorma) is a North Indian(Mughlai)/Pakistani dish. It's a curry dish wherein the meat is cooked with yogurt, spices, and oil until the flavors are infused. It is an unspoken rule for Pakistani weddings to have Korma as one of their entrees, and people also enjoy cooking the dish at home.

WHAT KIND OF MEAT DOES IT CONSISTS?

It is traditionally cooked with mutton (goat), though chicken is also gaining popularity nowadays. I personally have never heard of Korma being cooked with beef.

Mace and Nutmeg- They are the key ingredients in Korma. This gives Korma its distinct taste.

Oil- I have experimented with ½ cup of oil but It wasn't enough. ¾ cups of oil is the perfect amount for this amount of Korma.

Onion- The reason behind browning the onion and hand crush them is that's the authentic way to make the Korma, how they made it during Mughal era.

Yogurt- That is the base of the traditional Korma. Without yogurt it will be a regular gravy.

Spices- The spices provides the taste to the korma.

Ginger- This is used for garnish and the taste it gives to the korma.

HOW TO COOK THE PAKISTANI KORMA?

Why my Korma looks yellow?

You added too much turmeric powder.

Is Korma spicy, how can I make it spicy?

Korma is a mild curry which tends to be quite big on its flavor. If you want a spicy Korma just add more red chili powder.

Are almonds traditionally in Korma?

No. However, if you want to feel luxurious then add blenched almonds to your presentation or garnish.

WHAT IS KORMA SERVED WITH?

Shermaal Naan- It is a sweeter version of naan. Shermaal has a dense texture and is red in color. My personal favorite is Shermaal served with Korma.

WHAT CAN I PAIR THIS WITH?

My all time favorite combination to pair Mutton Qorma with is any kind of biryani, like Authentic Chicken Biryani, or Instant Pot Mutton Biryani. If you make biryani don't forget to make my delicious Cilantro Tomato Yogurt Raita.

Another good pairing is Achari Chicken (The Best) or Achari Keema (Qeema).

For dessert you can never go wrong with Kheer or any store-bought SouthAsian sweets like Gulab Jaman or Cham Cham. 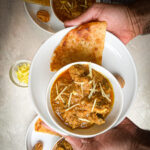