If there is any dish that is quintessentially Pakistani, it is biryani -- especially when made using a Homemade Biryani Masala. There is an otherworldly enjoyment in creating your own masala. After doing so, you'll be able to internalize this ages-old adage: once you make your own, you'll leave the grocery shelves alone!

Homemade Biryani Masala is an undeniable game changer. Dry roasted whole spices are blended together with some pinches of salt and a few powder spices.

A pretty simple assortment, but it still allows for some culinary Pakistani creativity, as you can mess around with the spices you put.

After all, we are all about rolling our sleeves up and learning as we do - so go ahead, make your own Pakistani Biryani Masala!

Cilantro Tomato Yogurt Raita typically accompanies the Biryani when the food is served.

Countless iterations of different spice combinations and mixtures have culminated in my final, most refined biryani masala.

HOW TO MAKE THE PERFECT MASALA?

HOW LONG DOES THE MASALA LAST AND HOW MUCH TO USE?

With recipe below the masala should last 2 to 2-and-a-half months if you make biryani once a week on average.

I typically mix about 4 tbsp of the masala with 1.5 lbs of meat.

Use 6-7 tbsp if you want it more spicer. Check out my Authentic Chicken Biryani and Instant Pot Mutton Biryani! 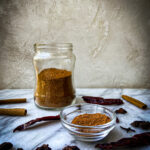